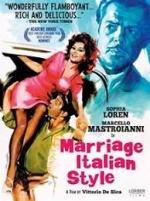 One of the most famous, and funniest, Italian comedies of all time, MARRIAGE ITALIAN STYLE received nominations for Best Foreign Language Film, and Best Actress for Sophia Loren, at the Academy Awards.

Marcello Mastroianni co-stars as the irrepressibly carnal businessman Domenico, who discovers Loren's Filumena as a young prostitute and keeps her as his mistress and confidante. When he chooses to marry a young cashier instead of her, Filumena is furious, and resorts to a series of wild and hilarious ruses to win back his hand.

We'll provide the snacks, but you might want to bring a bagged lunch.